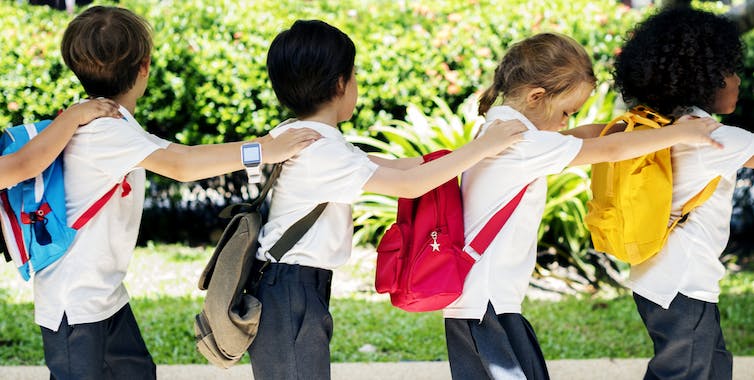 “Daddy, have we jumped the queue?” She looked at me with her big inquisitive eyes, a little confused and worried. Matilda is four and in reception class. She’s learning a lot of fascinating things at the moment, about planets, robots, rockets and space exploration.

She’s also learning about how we share with others and behave in class. One of the things drummed into her very early on at school was that you don’t jump the queue. You must wait for your turn when it comes to speaking in circle time or being served food.

“Daddy, have we done something wrong?” she added.

After a moment of puzzlement, I joined the dots. The speech Theresa May gave to business group the CBI, in which she said that a new post-Brexit immigration system would stop EU migrants from “jumping the queue” ahead of migrants from non-EU countries, had somehow reached her, probably not the prime minister’s target audience.

The impact of the CBI speech on her and hundreds of thousands of children in families with at least one parent born in a EU member state other than the UK is collateral damage in May’s desperate attempt to woo the anti-immigration lobby as she tries to get her Brexit deal through the parliament.

As the research carried out by my colleagues and I is showing, families with non-UK EU citizens feel anxious, devalued and disempowered by the Brexit negotiation process. They are struggling to shield their children from the negative trickle down effects of the protracted uncertainty on their legal status in Britain (a sentiment shared by British nationals living in continental Europe).

May’s speech was aimed for the small group of eurosceptic Conservative MPs led by Jacob Rees-Mogg and a powerful minority of Labour MPs (some on the frontbench) who like to believe EU workers have “stolen British jobs” and undercut wages. A recent report from the Migration Advisory Committee found, on the contrary, that EU migration has had a positive impact on many aspects of society.

Read more: What EU migration has done for the UK

It matters little to May, especially right now, that to over 3.5m EU nationals living in the UK and to Britons living on the continent, her words about jumping the queue were yet another reminder of how powerless they feel. Their lives are being played with like a football by teams they have not been allowed to join, since they were prevented from voting in the EU referendum.

Evidence from multiple public attitude surveys show that anti-immigration sentiment among the British public peaked around the time of the referendum in June 2016 and played a major role in the referendum outcome. “Take back control” resonated incredibly well with an electorate who had experienced decades of EU-bashing and scapegoating. This message was especially effective when teamed up with immigration, with voters promised that leaving the EU would allow them to regain control of immigration and borders.

In the run up to the referendum, day in, day out parts of the media warned their readers that the country was experiencing an invasion by an army of Europeans. Evidently the strategy worked.

Immigration back on the table

Since the referendum, surveys show that immigration has become slowly but steadily less of an issue for the British public. Some have argued that the outcome of the referendum has satisfied the demand for tougher immigration control in the voters. Others have noticed that after the referendum newspapers seem to have lost interest in the alleged migrant invasion, with the number of immigration-themed front pages decreasing steadily. The change at the helm of The Daily Mail is likely to have played a role here. Calls for moderation following a spike in hate crimes in the months after referendum also contributed to this reversal in media coverage of migration – but probably to a lesser extent than the idea that with the victory in the referendum, the “job is done”.

The Windrush scandal that emerged in spring 2018 also shone a spotlight on the damage of parts of the UK’s immigration strategy. May, who created the “hostile environment” for immigration during her tenure as home secretary, initially struggled to distance herself from the scandal that, at least momentarily, contributed to a change of national mood on immigration. The more conciliatory rhetoric embraced by the new Home Secretary Sajid Javid helped her administration to overcome the political fallout of the Windrush scandal.

Read more: ‘Compliant environment’: turning ordinary people into border guards should concern everyone in the UK

But with a full-blown rebellion against her Brexit deal gaining pace among both hard Brexiters and those campaigning for a second referendum, May has decided that focusing on immigration is what’s necessary to regain support within her party and with her voters.

“We haven’t jumped any queue. There wasn’t one when I came here 18 years ago,” I replied to my daughter. She seemed persuaded but then added: “Why is she saying it then?”